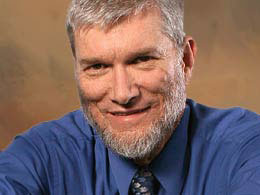 If the simian features of Ken Ham aren’t enough empirical proof that some humans amongst us haven’t benefitted from the process of evolution, his witless ideologies do just that.

Whether or not Ken Ham, CEO of the deliciously oxymoronic Answers in Genesis, actually believes his Creationist claptrap is a matter of debate.

However, his lucrative exploitation of scientifically false Christian beliefs is not: he created (lol) and curates that ridiculous museum that makes a point to depict scenes lifted directly from The Flintstones. The Creation Museum is more of a fantasy land than the educational enterprise it claims to be. Despite the museum’s best animatronic efforts, dinosaurs and humans never coexisted and the claims of this biblical amusement park have long since been proven both scientifically and historically false.

The whole discussion of Creationism is patently preposterous and all scientifically literate theologians have since denied its legitimacy while knowingly accepting and advancing the claims of Charles Darwin. In any intellectual circle boasting the least bit of credibility, evolution is true and Creationism has been reduced to a punch-line.

Even in the face of factual evidence, truly sycophantic Christians are never sundered from their false beliefs. Despite the proven falsehood of some of the more incredulous claims, the head-in-the-sand mentality perseveres.

This assault on reason is wholly propagated by dimwits like Ken Ham. Have a look at his latest piece of offensive dogshit: blah blah blah blah

Though it is doubtful that Ken has read anything other than the bible, here he pats himself on the back — quoting a review of his own book: Already Compromised.

The title is an allusion to the conspicuous cracks in Christian theology and the divinity of the bible that are apparent on even a cursory examination of the subject. The minimal learning required to fully shake a sentient being’s Christian faith is growing more and more obvious. Dangerous concepts like science, evidence, facts, learning, philosophy and rational thought are the ideological enemies of Christianity (and all religion) and as such, a phony like Ken Ham must denounce them as evils in order to cash in on ignorance.

With wistful pride, Ham quotes a preteen child’s understanding of his new piece of propaganda:

“I’ve got the answer to this problem. Put down your textbooks, and open your Bible.”

This championing of ignorance, this denunciation of education, this intended dissuasion of skeptical inquiry spoken through a child only intensifies its reprehensibility. This rhetorical trick serves to take the detestable statement from the Ham’s lying lips and pass them innocently through that of a child. It would be diabolical technique if it wasn’t so flagrantly apparent.

Moreover, to backhandedly shill one’s personal interest through the direct impugning of legitimate education is a disgraceful example of faith perverted as Ken Ham is a literal merchant in the purveyance of proven lies. He’s not only profiting greatly from religious ignorance, he is clearly exacerbating it.

He goes on to say: “I suggest that all Christian parents read this book” and then links the reader directly to his AiG bookstore.

Be sure to buy a t-shirt as well.

Ken Ham is either an authentic vicar of god’s holy propriety or he is a twisted opportunist marked by unscrupulous study of market research. The available evidence weighs heavily in favor of the latter.

The above post was inspired by the saccharine drivel he posted on his blog earlier this morning. This update is inspired by this letter printed on a different website of which he is integrally involved.

Ken Ham would be an asset to any informercial. This letter is, at most, glorified ass-kissing with no other purpose than to tout the spiritual efficacy of whatever product this lunatic can get his face on. If there wasn’t already a laundry list of additionally suitable candidates culled from the ever lucrative Jesus market, Ken would be the Krusty the Klown of Christianity.  Without giving away too much of the majesty of Ken’s oversubtle blathering, all the letter does is talk about how spiritually effective his various products are:

She then explained that she purchased some DVDs, books, and a subscription to Answers magazine.

Oh. Is that all it takes to be saved? Despicable.