This murder occurred about a mile from where I went to high school. Smith gutted his victim with a kitchen knife in front of a bank in broad daylight. Legally speaking, it’s good he only intended to send a message by: plunging a knife with an 8-inch blade into him as far as it would go, severing two major blood vessels.

5 more months of this bullshit? Fear-monger, religious charlatan and all-around crackpot Harold Camping has finally emerged from whatever cubbyhole he’s been hiding in since his ridiculous prediction of the world’s demise failed to come true. The much ballyhooed day of reckoning came and went like any other Saturday, without the realization of apocalyptic earthquakes and Christian prophecy. Even the most brainwashed of believers were quick to dispell Camping’s idiotic notions of rapture through other biblical evidence. (Biblical contradiction, whodathunkit?) Yet, there were some infectiously low-functioning adulators who sprung to the cause and freed themselves of their life’s savings in order to finance the fear. If they can no longer afford to feed themselves and die of starvation, it would only serve to strengthen Darwin’s theories of natural selection.

Camping, accepting the shame of his (second) errant prediction, doubled down and proclaimed October 21st, in God’s holy mercy, to be the final day of days. (No, seriously…) There was a great YouTube clip of this senile coot emerging from his doorway circulating yesterday. It was taken down rather quickly but hilariously depicted a confused old man struggling with gasping out a few sentences. “I have to live with this,” he mournfully muttered before closing the door and denying interviews: perhaps only for a few more months, Harold.

One thing left behind (har har) in all this inane discussion of the rapture is that Christians do actually believe what Camping predicted will come true. They cite the gospel of Matthew to show that only god knows the time and date, but, they do put stock in the myths of revelation. To separate the mindless cheerleaders of a batshit Evangelical radio host from the masses is to minimize the superstition held sacrosanct by those wrongfully claiming to have a truer grasp on their faith. There truly is no difference between these sycophants of the biblical text. Whether one thought May 21st was the end of days or whether Matthew’s gospel casts a shadow of uncertainty on the day of reckoning is wholly irrelevant. Both beliefs stem from a collection of epic poetry, edited, reedited, reworked and completely cobbled together from broken pieces of orally transmitted lore. As such, both prophecies are claimed assiduously by their respective believers and both can be easily dismissed as ancient Palestinian mind-control. 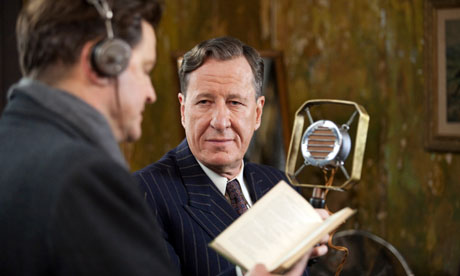 I’m a bit late in the game, having only watched the 2010 Academy Award winner for Best Picture late last week. However, I was compelled to write up a bit about it because it struck me as a movie that is both inspiring and pointless. The more-or-less biographical tale of George VI overcoming his speech impediment is one that should help anyone afflicted with anything begin to take strides towards progress. Faced with the prospect of monarchial broadcasts, George VI seeks the aid of a rather cheeky and unorthodox speech pathologist in the hopes of beating his stammer and assuming the throne in all rhetorical glory. The King’s speech is something tangible for his loyal subjects and his radio broadcasts at particularly dire times significantly portend the overarching morale of the country. Through tireless work and determination (amid a few efforts to quit the therapy), the King delivers a thoroughly inspired speech on the eve of what would become World War II.

It is the juxtaposition of these two events that made me raise an eyebrow to this film. World War II, set as impending backdrop of this film, is starkly placed as an unnamed doom. Hitler, often referred to in the film, is an unseen evil. The country is well aware of the growing malefactions coming from Nazi Germany, yet the focus is on a spoiled prince struggling with a disorder that a paraplegic would instantly trade for. Yes, a stutter would be crippling for a King, even one who is an admittedly nonessential member of government. In fact, George VI’s affliction goes beyond a few repetitive syllables. At times, he simply cannot utter words or sentences. Whatever the case, his personal problems and the possible bruises to his majestic ego pale in grave importance to the events that still shape our world’s history.

The film tells a good story and the writer was, in fact, inspired to pen this tale because of George VI’s ability to overcome his impediment. Further, Geoffrey Rush is standardly excellent and the film itself has all the pastoral charm of a period piece. It is just difficult to fully invest oneself in the tribulations of someone tormented by such a minor hindrance especially when the background forebodes one of the central events of recent and all history.