Hip hop has never been my favorite genre of music, 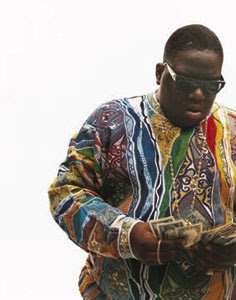 but that is definitely not to say some of the magic has not touched me and stayed with me. One such artist died today in 1997. Christopher Wallace aka Biggie Smalls aka the Notorious B.I.G. was gunned down on this day 14 years ago. (Makes me feel really goddamn old, btw). Regardless, Notorious is unquestionably one of the top rappers of all time. His unique flow, original take on a very cliched gangsta world view and overall attitudes remain as poignant today as they were when he was spitting this stuff originally. Though I don’t believe in an afterlife, he’ll never be forgotten and thus has transitively achieved immortality.

Yesterday, I C&P’d a bunch of random tweets from the UK. I figured I’d change it geographically and see what lentil blatherings my fellow Americans had to offer. A few quick clicks and it was time to mine the intellectual elite of Houston Texas for their thoughts on #lent. Again, my commentary appears in italics underneath their tweet.

sambluesky Sam Woodward
So far I have seen people on Facebook giving up swearing and hair straightners for lent! Not heard those two before.
Hair straighteners? The Lord commends your virtuous sacrifice.

6Eight Mark Broadway
Already missing #kfc, this is gonna be a long #lent
Amazing. Does KFC even serve breakfast?

COSSussex Christ Our Savior LC
Ash Wednesday worship is tonight at 6:30. Come and begin your Lent “Cross Training” with the imposition of ashes and prayer.
lol, imposition.

kelsrobertson1D KelseyRobertson
I’m giving up whistling for lent! 😀
Finally, we’ll be free of those cheery carefree melodies you were poisoning the air with.

cigarsNscotch Cigars Andscotch
I think it’s ironic that Catholics celebrate “LENT“, and Jews don’t.
They have plenty of holidays that tell them how guilty they should feel.

P_Nyce21 Nak Muay
I gave up energy drinks for lent. Don’t mess wit me for a few days, I didn’t give up violence
I appreciate the honest caveat.

The inanity could literally go on and on. I did a quick google image search for something to go with this closing paragraph and all the choices were equally ridiculous. It was very hard to pick a picture that accurately captured the dumbfounding nature that Catholicism engenders inside me and other like-minded people (like scientists, evolutionary biologists, philosophers, astronomers, physicists etc.). Instead, lets finish this up by saying that: even during this turbulent time of sacred repentance, fret not as you wander through the valley of sin and doubt, cast out fear of starvation and hunger: Taco Bell has you covered.